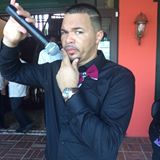 Timico ‘SawYerBoy’ Sawyer is a comedian, vlogger, and social media sensation based in Nassau, Bahamas.

He only recently began his career in the entertainment industry releasing his first video on Mother’s Day 2013 and he hasn’t looked back since!

With over 65,000 followers on social media, his videos have been viewed more than 5 million times!

Asked why he does his comedy, Timico says, “simply to put smiles on people’s faces”.

Winner of the Bahamian Icon Award for entertainment in 2015, he credits his three beautiful kids — Timico, Tamia, and Taylor Rose Sawyer–as his inspiration.